In 1809, three history-making individuals were born:

●    Abraham Lincoln, the American and 16th president of the United States,
●    Charles Darwin, the Englishman and founder of the theory of evolution of living species,
●    and Louis Braille, the Frenchman who invented the eponymous alphabet. His worldwide literacy method for the blind made him the one to give them the means of accessing learning and knowledge.

Louis Braille was born on 4 January 1809 in Coupvray, in Seine-et-Marne, about forty kilometers east of Paris. The youngest of four siblings, he was raised by loving and caring parents. 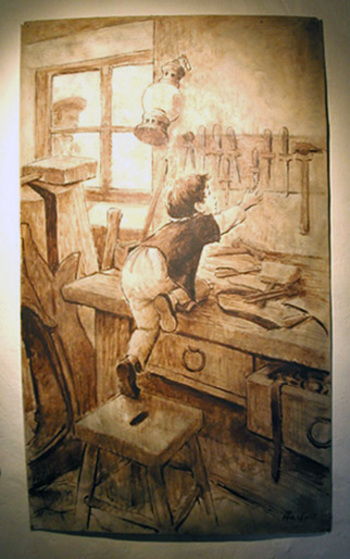 A tragic accident at the age of three in his father's saddlery shop caused Louis to go blind. Imitating his father and holding a sharp tool, he severely injured his right eye. Medical knowledge at that time could not save his eyesight, an infection spread to both eyes, and by the age of five Louis was completely blind.

Fortunately, Louis was lucky to be raised in a close-knit family, with parents who wanted to give him a good education despite his severe disability, which, at the time, was exceptional. After learning the alphabet, made with nails hit into a wooden plank, he attended Father Palluy's classes, before going to the village school for three years. Very gifted and intelligent, he quickly became one of its most brilliant students.

When he turned ten in February 1819, Louis Braille left his family for the Royal Institute for the Young Blind in Paris, the school founded by Valentin Haüy in 1785, where he had the good fortune of being accepted. From then on, he spent most of his life there, returning to Coupvray

Given his remarkable intelligence and the early invention of his alphabet, the Institute hired him as a teacher when he was only 17 years old. He taught grammar, mathematics, history, geography, and music. He also played the organ in several churches in Paris.

At his school, reading and writing was done with the system introduced by Valentin Haüy: black letters (that's what we call the printed writing used by the sighted) in relief. However, these letters are very difficult to read by touch and do not allow writing.

When Louis Braille was 12 years old, he first tried out Charles Barbier de la Serre's system, called Sonography, which transcribed phonetic sounds using twelve raised dots (protruding points). Although he was enthusiastic about this new code, which was much easier to read and write, it had the disadvantage of being only phonetic (similar to text messages) and too high for immediate tactile reading.

At a very young age, between the ages of 12 and 16, Louis Braille therefore set out to adapt and perfect the Barbier de la Serre system. He successfully created a complete alphabet, including punctuation marks, mathematical numbers and symbols, and musical notes. Himself a musician, he extended his system to include musical notation when he was 19 years old.

In addition to Braille writing, Louis Braille made other important inventions, including Decapoint, or Raphigraphy, which for many years let blind people easily write to sighted people, using black letters with raised dots.

But despite his keen interest, since decision-making was governed by sighted people (who preferred a more traditional black letter system), it took another 20 years before Louis Braille's alphabet was used, even though it was already relatively successful.

Of delicate health, Louis Braille died of tuberculosis at the Royal Institute for Blind Youth on 6 January 1852 at the age of 43. He was buried in the cemetery of his village, Coupvray, a few days later. His ashes were transferred to the Panthéon on 21 June 1852.